FuseFX, an award-winning visual effects studio that specializes in providing services for television, film, commercials, virtual productions, and VR, haso pened a new office in New York with the capacity to double its current New York staff of 60.

The new office, located in the Financial District with views of the East River and Brooklyn Bridge, will be able to hold 115 staff members once COVID-19 restrictions have been lifted and it is safe to do so. Facilities include three screening rooms, 11 private offices, an IT bullpen, two conference rooms, and many open workstations. 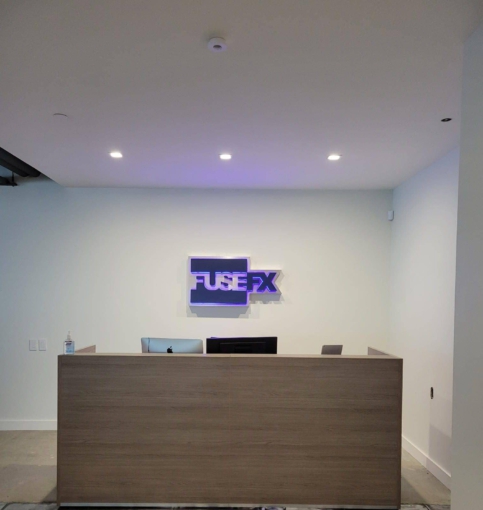 This office will be part of FuseFX's continued global expansion strategy. After opening its initial New York office in 2014, the New York team has increasingly expanded, and the new office will allow that growth to flourish in an upgraded space.

"Our new office space in the Financial District represents the culmination of industry-leading work and steady, consistent growth over the last seven years with some of the premiere artists in our industry driving us forward. With anticipated continued growth of the film and television market in New York, this office will allow us to grow with it." Head of Studio Greg Anderson said.

Executive Producer, NY Lindsay Seguin said, "I am extremely excited for our new office. To be part of such a strong, dedicated team is something I am proud of every day. I'm looking forward to connecting with everyone safely again!"

"When we opened our studio in New York in 2014, we knew it was a critical location for us to establish a presence to better service our clients. I'm soproud of the success of our team there and the fact that we now have one of the premier visual effects studios operating in New York City. That success has created the opportunity to expand again and move into a beautiful new space in lower Manhattan," said Founder and CEO of FuseFX David Altenau.

Altenau continued, "This move markedly increases our presence in New York and allows us to take on even greater challenges. It is the result of the hard work of every one of our talented staff in the New York studio, under the leadership of Greg Anderson, Lindsay Seguin, Ariel Altman, John Miller, Lauren Montuori, and so many others. I'm extremely excited to begin our next chapter there."

FuseFX was founded in 2006 in Los Angeles by David Altenau and co-founders Tim Jacobsen and Jason Fotter. Establishing itself as an award-winning studio, FuseFX provides full-service visual effects for episodic television, feature films, commercials, virtual productions, and VR. The company has eight studio locations, including its flagship studio in Los Angeles, as well as offices in New York, Atlanta, and Vancouver. The company's studios in MontrĂ©al, Toronto, and BogotĂˇ are serviced by Folks VFX, which joined the FuseFX family of brands in 2020. Rising Sun Pictures, which joined in 2021 services the Adelaide, Australia studio. FuseFX is a portfolio company of EagleTree Capital.